Source Institutions
Add to list Go to activity
Activity link broken? See if it's at the internet archive 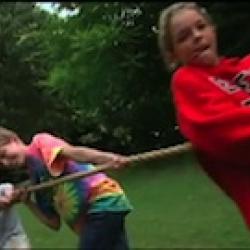 This activity (on page 2 of the PDF under SciGirls Activity: Tug O' War) is a full inquiry investigation into tug-of-war physics. Groups of learners will test two tug-of-war strategies. Which is better: a team of a few big kids or lots of smaller kids? Learners form teams based on weight. Each team is timed as it pulls a sled of sand bags equal to their weight for 30 feet. Learners determine an average pull time for each time (after resting) and compare the results. Relates to linked video, DragonflyTV: Tug O’ War.

Components that are part of this resource: